The eastern Menai Strait is the most important aquaculture site in all of Wales, and the single largest mussel farming area in the whole of the UK.  The success of this area is due to the unique natural environment that is perfect for mussels; and also the legal protection (known as a “Fishery Order”) that was established in 1962 and which allows local mussel farmers to cultivate mussels here without the fear that they will be stolen by others. Hand gathering of wild mussels within the area is also covered by the Order.

Since devolution, the mussel fishery in the Menai Strait has been managed by the Menai Strait Fishery Order Management Association (MSFOMA), which was granted these powers by the Welsh Government in 2010.

2022: A new Fishery Order for the future

MSFOMA have worked with Welsh Government to ensure that when the old 1962 Fishery Order expired at midnight on the 1st of April 2022 it would be replaced by a new Fishery Order, to help Wales to maintain its leading place in UK aquaculture, and to secure long-term jobs and businesses in the local economy.

The new Order came into force on Saturday the 2nd of April 2022.  It can be downloaded from the UK Government legislation website here.  As before, the controls under this Fishery Order only apply to shellfish farming.  It does not impose any new restrictions or controls on other day-to-day activities in the area.  For shellfish famers this new Fishery Order is vital for their future.  For everyone else in the area it will be very much “business as usual”.

The map below shows the extent of the new Fishery Order and the location of the “designated several fishery area” that has been established by MSFOMA with the Minister’s consent within the Fishery Order area.  Mussel farming will only take place within this “designated area”.

A notice describing the “designated area” has been published by MSFMA and can be accessed here.

This new Fishery Order will remain in place for the next 35 years.  More information about the Order and mussel cultivation in the Strait is presented below.

What is the Menai Strait Fishery Order Management Association?

The Menai Strait Fishery Order Management Association (MSFOMA) was set up in 2010 to oversee the management of the shellfish farming areas in the eastern Menai Strait.

MSFOMA is an independent not-for-profit organisation. Its membership comprises 2 representatives of the fishing industry, and 1 representative from each of Natural Resources Wales, Gwynedd County Council, Ynys Mon County Council, Beaumaris Town Council, Bangor City Council and the University of Bangor. Welsh Government also attend the quarterly meetings and it is chaired by Alan Winstone, an independent fisheries expert from Anglesey.

What is a "Fishery Order"?

In Wales, a “Fishery Order” is an Order made by the Welsh Ministers that assigns the existing public fishing rights in the sea for certain species of shellfish to an individual or organisation.

A Fishery Order does not create any new fishing rights, but by privatising the fishing rights it allows for proactive management and cultivation of shellfish. It also can regulate the hand-gathering of wild mussels through a licensing system with appropriate conditions, such as minimum sizes and where and when harvesting takes place.

This does not affect anglers fishing on the shore or from boats, nor does it stop you from gathering worms or crabs to use as bait.

What will happen in the Order area?

Mussels have been cultivated in the Menai Strait since 1962. Mussels are farmed in areas that are leased to each mussel farmer. Each farmer harvests small “seed” mussels and puts them on the shore in the sheltered waters of the Menai Strait. The mussels grow fast here, and within 2-3 years they are big enough to harvest and eat.

Mussel farming is done directly on the seabed – no nets or equipment are placed on the shore. Over the years the hand-gathering of mussels by licenced fishermen has also taken place from time to time when wild mussel numbers have reached harvestable levels.

How are mussels farmed?

Mussels are farmed by taking small (“seed”) mussels from ephemeral mussel beds and transporting them to the Menai Strait using specially designed mussel farming vessels.  In the Menai Strait the seed mussels are returned to the sea (a process called “relaying”) in the farmed areas (called “lays”).

It usually takes 2 years for these seed mussels to reach market size.  During this time the mussels may be moved from intertidal areas to subtidal areas by the mussel farmers to optimise their survival, growth, and quality.

Are the mussels chemical free?

Yes.  There is no need to treat farmed mussels with chemicals to control pests.  They don’t need to be fed either – they filter their food from the seawater, cleaning the water in the process.  In Sweden and Denmark, mussel farming is being used to clean up polluted waters.  Mussels are good for water quality and fix carbon dioxide to produce their shells.

Do the mussel farmers use boats?

Yes. Mussel farmers use boats but are only on site when re-laying and harvesting mussels. Vessel operations are limited to high water periods, mainly in the autumn-spring period, and generally between Monday and Friday.

How are seed mussels collected?

Seed mussels settle from the plankton at these locations on to the cobbles and rocks left behind from the last Ice Age.  To avoid damaging these vital seabed habitats, the mussel farmers wait until the young mussels have built up a layer of mud beneath themselves.  This is typically in the period from August-October.  After October the young mussels are swept away by stormy weather in the autumn and winter, leaving the cobbles and rocks exposed and ready for a new settlement of mussels the next year.

Small "seed" mussels on a beach

This process has repeated year after year for the past 50 years.  In recent years the recruitment of seed mussels on the wild beds in Morecambe Bay and Caernarfon Bar has become less predictable, possibly as a result of climate change.

Mussel farmers are working with scientists here in North Wales to develop other ways of collecting seed mussels, which has proved to be a more reliable source of seed mussels in other countries – the pictures below show some of these mussels growing on ropes near to Puffin Island. 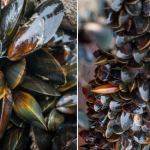 Mussel farmers are constantly working with scientists from Bangor University’s Shellfish Centre and Centre for Applied Marine Sciences to improve farming methods and ensure that the sustainability of the fishery is always improving.

Interactions with the marine environment

The Menai Strait is a nationally and internationally important site for marine wildlife and for coastal bird populations. The Fishery Order is located within the Menai Strait and Conwy Bay Special Area of Conservation (SAC) and overlaps with the Traeth Lafan Special Protection Area (SPA). The extent of these areas is shown in the map below. 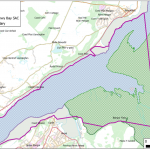 MSFOMA and the shellfish farmers work closely with Natural Resources Wales to ensure that mussel farming is compatible with the legal requirements to protect wildlife and habitats within the SPA and SAC areas. We also work with scientists from the University of Bangor to study the potential impacts of mussel farming on the marine environment. Many of these studies have been published in scientific journals, and give mussel farming a clean bill of health.

What about other activities?

The new Fishery Order is very much a “like for like” replacement of the existing Order that has been such a success since the 1960s. It will ensure that shellfish farmers can continue their work, and will not affect existing day-to-day activities in the Menai Strait such as sailing, angling, or walking on the seashore.

Will I still be able to…

Sail in the area?

Yes. There are no restrictions on sailing over the shellfish farming areas. The farmers liaise closely with sailing organisations to ensure that work is planned to allow the marking of courses and avoid key sailing events (such as races).

Continue to use boat moorings in the area?

Yes. The Fishery Order does not restrict access to the existing moorings in the area.

Walk on the beach or foreshore?

Yes. The Fishery Order does not restrict access to the beach or foreshore. You will still be able to walk on the shore.

Beach a boat on the shore?

Yes. The Fishery Order does not prevent or interfere with beaching of boats whether for picnics or for maintenance.

Go angling in the Menai Strait?

Yes. The Fishery Order is only concerned with shellfish, so you can fish from the shore or a boat as you always have, and can continue to gather worms or crabs for bait as before.