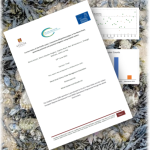 A new report published by scientists from Bangor University gives the green light for regenerating the shellfish farms in the western Menai Strait.

If you have eaten oysters, then they were probably Pacific oysters.  Although they are delicious, they are not native to the UK.  There is a risk, particularly as our seas are warmed by climate change, that cultivated Pacific oysters could successfully breed and establish wild (or “feral”) populations.

Government concerns about Pacific oysters have halted progress with MSFOMA’s plans to revitalise shellfish farming in the western Menai Strait.  Over the past 18 months MSFOMA has been working closely with Bangor University scientists from the Shellfish Centre at Menai Bridge to investigate and address these concerns.

A detailed report has just been published after Shellfish Centre experts have conducted field trials, monitored the shores of the Strait and modelled the risk of Pacific oysters becoming established in the Strait.  Their full report (available here) sets out their findings in detail.  It draws several clear conclusions:-

MSFOMA has just sent a copy of this report to the Welsh Fisheries Minister, Lesley Griffiths, highlighting that Pacific oyster farming in the Strait is clearly a very low risk to the marine environment.  We hope she will now take action to nurture shellfish farming in the western Menai Strait, which will be both a benefit to the local economy and a source of sustainable and delicious food.

This entry was posted in News, Uncategorized. Bookmark the permalink.